Kapil Sharma says that, his mother is the biggest inspiration for his sense of humour and encouragement. 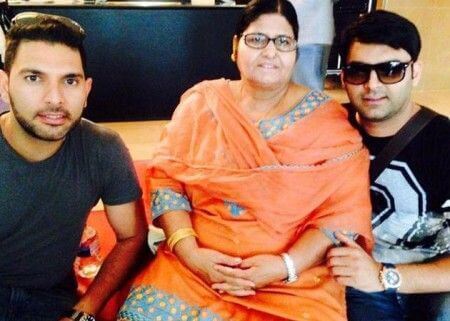 2. From unknown worker to world famous comedian
Kapil Sharma worked in several places, includes cloth mill, PCO, and picking up the crates of soft-drinks to earn daily wage. He is now world famous stand-up comedian.
3. Initially rejected for comedy show
Kapil Sharma was initially rejected for the show ‘The Great Indian Laughter Challenge’ in the audition round. Later on, he received a call to come up and he ended up winning the show.
4. Spent money on sister’s wedding
Kapil Sharma spent his prize winning money on her sister’s wedding. He won about Rs. 10 lakh as the winner of ‘The Great Indian Laughter Challenge’.
5. Family of Police Force
Kapil Sharma belongs to the family of Police force. His father was working with the Punjab Police as head constable and elder brother is right now working in the Police Force.
6. Lost father at young age
Kapil Sharma lost his father at a young age to cancer.
7. He is sensitive person!
Kapil Sharma says, he is quite a sensitive person and cries easily at times.
8. First love is music!
Did you know? Kapil’s first love is music and he is happy with the things he have. He always likes simple things in life. He is also a good singer too and participated in the singing competition, ‘Star Ya Rockstar’.
9. He is bachelor!
It’s a good news for all female fans in India and around the world. Kapil Sharma is still a bachelor! So, best of luck to all female fans!
10. Hosted Chhote Miyan Show
He hosted the show ‘Chhote Miyan’ for the first time in his career.