Chakka Panja 2 is a light hearted entertainer. With slight changes in the main story line from part one , the movie has turned to become more like an old wine in a new bottle. 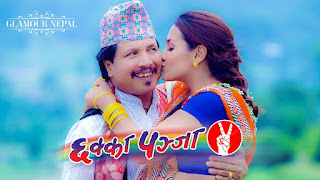 Manpower agency and agents have been replaced with education consultancy/ consultants. The craze/ compulsion for foreign employment has been replaced by the current trend of abroad studies. While the main characters in part 1 strive for a better future in the middle east, here in part 2, the main characters look forward to a stable life in Australia.Then comes the problems of low Ielts score and poor financial condition because of which the young characters resort to desperate measures like Paper /Fake marriage.
Fake marriages apparently leads to crisis in relation, family and society. Chakka Panja was more about life and expectations of Youngsters in the villages but on the contrary Chakka Panja 2 deals with the abroad study dreams of the city dwelling Youth. Second half has been unnecessarily stretched. Magne Buda hasj done an outstanding job as ‘consultancy mama’ while Priyanka Karki looks weird as Swastima’s Lawyer mom.
I think it is quite an injustice on Priyanka and definitely a torture for viewers to see their favourite and sizzling hot actress Priyanka as a middle aged mom. Aayushman D.R Joshi surprises as lead actor in negative role.He has done a fairly decent job. 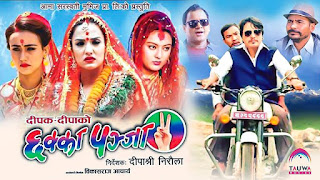 Swastima and Barsha have done well in their comic roles too. Deepak Raj Giri has already established himself as a star actor now so he doesn’t disappoint in his role as a Tough Cop. Jitu Nepal’s character as Pandit is similar to the character he played in the prequel of the movie. Apart from that, there is a huge pool of comic actors from the Nepali Comedy Television series who add spice to the overall movie. Talking about the music, ‘ Eh daju nasamau’ is the only catchy song in the entire movie. I had expected at least another good song as in the prequel. Magne Buda with his signature style seems to be the main character delivering some perky moments to laugh at.

The first half is decent enough with a lot of light moments which keeps the audiences engaged . However, Magne Buda as Consultancy mama turns to be a life saver in the comparatively slow paced second half. The movie ends with a lot of unexpected twists and turns, similar to the climax in the prequel. Anyways, don’t worry about the spoilers. You can go, watch and enjoy for yourself during the festives this year. The movie is surely worth watching for once.
I would rate it 2.5/5.